During WW2, the Eighth Air Force used famous bombers such as the B-17 Flying Fortress and the B-24 Liberator took to the skies from their bases in the East of England. Flying mainly daylight raids, they were escorted by their Fighter plane escort (known affectionately as 'Little Friends') in aircraft such as the P-47 Thunderbolt, P-38 Lightning and P-51 Mustangs. By mid-1944, the unit had a total strength of more than 200,000 people, and it could send more than 2,000 four-engine bombers and 1,000 fighters on a single mission against enemy targets in Europe. This is how the 'Eighth' were to become known as 'THE MIGHTY EIGHTH'.

The Eighth Air Force is still active today and is head quartered at Barksdale Air Force Base, Louisiana.

This is a great reproduction of the Eighth Air Force patch worn on the shoulder by USAAF Personnel. Approximately 6cm in diameter, this patch goes great with your USAAF uniform!! 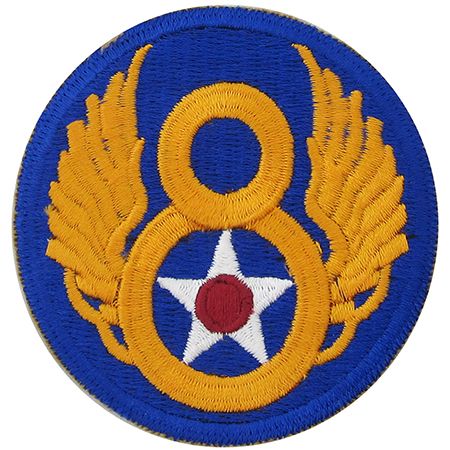