The Ninth Air Force was formed during the Second World War on the 8th April 1942. They fought in both the Western Desert Campaign as well as Northern Europe, and were designated a 'Tactical Air Force'. This is because, unlike the Eighth Air force, the Ninth were to provide support for ground campaigns, usually with objectives selected through co-operation with the armies. The
Ninth would also provide the ability for supply and logistics.

Using various aircraft, the Ninth would carry out a wide range of roles. Their bombers such as B-24 Liberators, B-25 Mitchell's, B-26 Marauders would hit large targets. The fighter-bombers such as the P-38 Lightnings, P-47 Thunderbolts and P-51 Mustangs would attack targets of opportunity, provide escort to the bombers, or provide 'Air Support' for the troops on the ground. Meanwhile, there were also the transport aircraft of the Ninth, such as the C-47 Skytrain, the C-46 Commando and the UC-64 Norseman, which would provide Paratrooper drops, or Medical Evacuations as well as various other roles.

The Ninth Air Force were very active throughout the Second World War, moving overseas to France after D-Day, and taking part in such battles as Operation Market Garden, Battle of the Bulge, Operation Varsity and much more.

This is a great reproduction of the Ninth Air Force patch worn on the shoulder by USAAF Personnel. 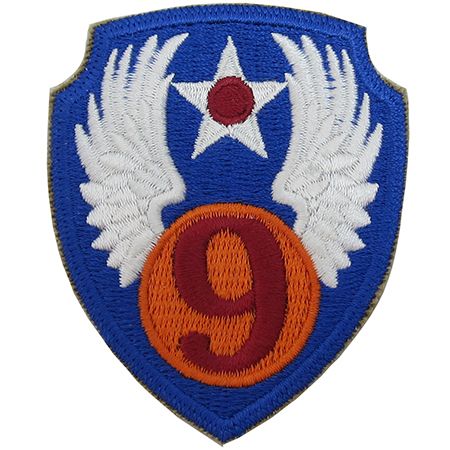