On the 20th August 1942, the Twelfth Air Force was activated at Bolling, Maryland, USA. The idea was to have an air force capable of supplying strategic heavy, medium and light bombing as well as Fighter cover for the invasion of North Africa by the Allies, known as 'Operation Torch'. The 12th Air Force initially moved to England for training. The 12th also spent time in Algeria, Tunisia and Italy throughout the war. The aircraft used by the 12th varied from the British Spitfire, American P-51 Mustangs and P-47 Thunderbolts, to bombers such as the B-17 Flying Fortress, B-24 Liberator, B-26 Marauders and many more. The force also had an element of Troop Carrier units, using the C-47 Skytrain to provide paratroopers and supplies.

The Twelfth Air Force is still active, and has seen action in many wars/conflicts since the Second World War, including Vietnam, The Gulf Wars, and Afghanistan. It is head quartered at Davis-Monthan Air Force Base, Arizona, USA.

This badge/patch is a fantastic reproduction of the WW2 insignia worn on the shoulder sleeve by servicemen attached to the 12th Air Force.

This badge/patch is the perfect addition to your collection or 12th Air force portrayal! 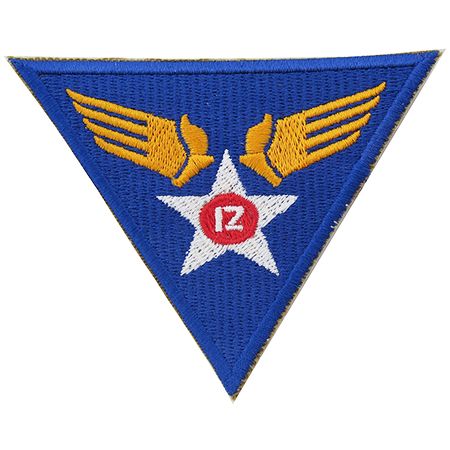