A quality leather holster for the Webley Service Revolver.

This authentic leather Webley holster is made with light brown leather. On the rear is a leather loop for securing to a belt. This holster suits many Webley Service Revolver models, including the famous Webley Mk IV Service Revolver that was used extensively throughout the first half of the 20th Century by British and Commonwealth forces.

The Mk IV first entered service in 1899 during the Boer War. Despite being superseded by the Mk V as the standard Service Revolver for British and Commonwealth forces in 1913, by the time hostilities began in 1914 the Mk IV was still the most numerous revolver amongst British Forces, and was used throughout the First World War.

The Mk IV also saw service during the Second World War. Due to a shortage of firearms in 1940, as a result of both the rapid expansion of the armed forces and the manufacturing shortcomings of Royal Small Arms Factory in Enfield, 126,000 Webley Mk IV revolvers were purchased by the Ministry of Supply. As such the Webley Mk IV was used by British forces throughout the Second World War. The Mk IV, and all other service revolvers, was officially retired in 1963 in favour of the Browning Hi-Power pistol.

This is a quality, light brown leather Webley Service Revolver Holster that is appropriate for any British or Commonwealth re-enactor. See our Sam Browne belts below to finish the authentic look. 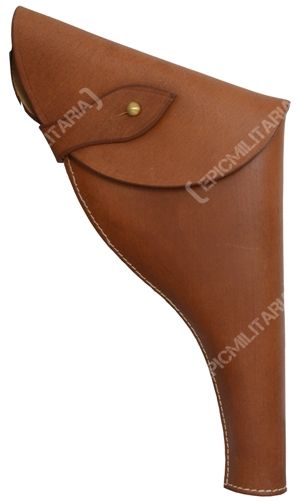