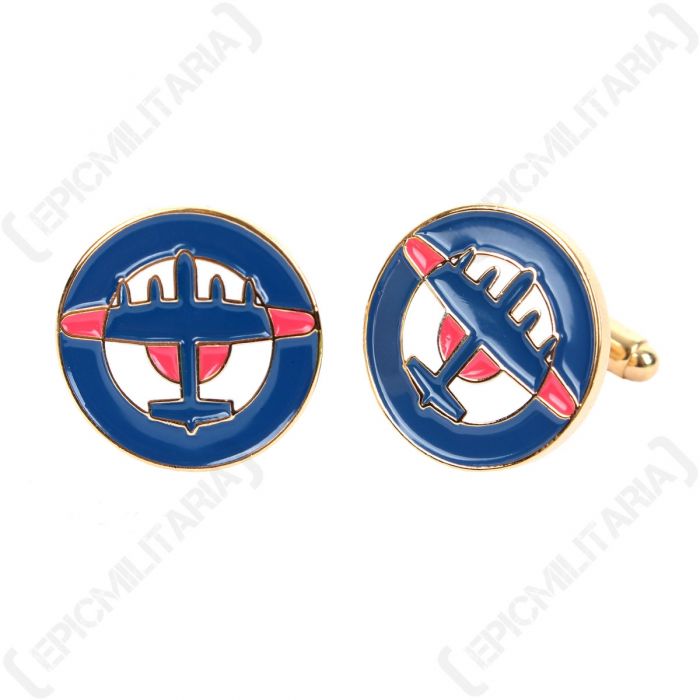 A pair of brand new WW2 inspired Lancaster cufflinks. Great quality with fine detailing of the Lancaster silhouette over the iconic RAF roundel.

Developed from the Avro Manchester, Roy Chadwick and his team at Avro designed the Lancaster to serve with the RAF as a contemporary to the other 4 engined heavy bombers already in service with the RAF such as the Halifax and the Stirling. First flown on the 9th January 1941, The Lancaster was a major success with her crews of the RAF's Bomber Command. The Lancaster was able to carry the heaviest bomb loads of any RAF aircraft during the war, including the 22,000Lb 'Grand Slam bomb'.

Probably one of the most famous Avro Lancaster mission, would be the attack on the dams in the Ruhr Valley known as 'Operation Chastise'. 617 Squadron, a unit formed to fly 'special missions' had 19 Lancasters take off on the 16th May 1943, equipped with a single 'Bouncing Bomb' per aircraft. Each Lancaster had to make a run on either the Mohne, Eder and Sorpe dams. In order to get the best results, each aircraft had to fly at a height of 60ft (18m) and at a speed of 232mph. the 'bomb' then 'bounced' across the surface of the water, sink along side the dam wall, and would explode, hopefully breaking the wall apart. Two dams were breached, with the third sustaining damage. The mission came at a cost. 8 Lancaster's were shot down, with 53 aircrew killed, and 3 taken prisoner.

A total of 7,377 Avro Lancaster's were built. A little more than 3,200 were lost in combat during WW2. There are currently only two flying in the world today.