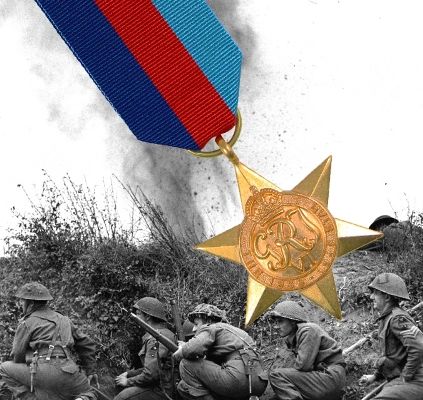 The 1939-45 Star Medal was introduced to reward the service of forces who served at least 180 days of operational service overseas during WW2. Specifically, the 180 days must have been spent between the dates of 3rd September 1939, and 8th May 1945 (2nd September if spent in the Far East). There are also some cases of special circumstances, where the medal was awarded for one day's service.

The medal features the Royal cypher "GRI VI" on the front, supported by the text "THE 1939-1945 STAR" below, and the crown above. The ribbon displays equal stripes of red, light and dark blue, to represent the different arms of the armed forces.

These medals are British made, deep struck by hand in a factory in Birmingham.

To clarify, these medals are MoD approved reproductions of the genuine issue medals and can be issued without reservation or application. The original genuine medals can only be issued through application to the MoD/ UK government.