This is an exquisite replica of the British War Medal of WW1, and is ideal for the collector or as a replacement.

These campaign medals were introduced by George V to celebrate the conclusion of the First World War. They rewarded service between 5th August, 1914, and 11th November, 1918, which was later extended to 1920.

The die-struck medal features the uncrowned effigy of King George V on the front, encircled by the text "GEORGIVS V BRITT. OMN: REX ET IND IMP:", translating to "George V, King of all the British Isles and Emperor of India". The reverse of the medal features St George on horseback to symbolise man controlling a stronger being than himself, mirroring the use of scientific and mechanical instruments during the war. He is seen trampling upon the eagled shield of the Central Powers and a skull and cross bones, under a rising sun to symbolise victory.

These medals are made in Great Britain by one of the finest and oldest medal and military accoutrement manufacturers in the country (UK Medal Office Approved), so you know that in terms of quality these cannot be beaten.

To clarify, these medals are MoD approved reproductions of the genuine issue medals and can be issued without reservation or application. The original genuine medals can only be issued through application to the MoD/UK government. 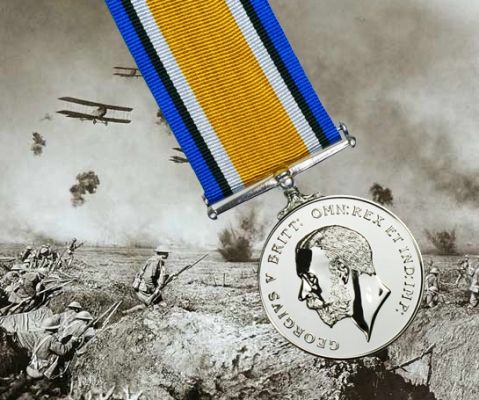