The 18th AB Corps can trace their history back to January 1942, when it was formed as an 'Armoured Corps'. This was not needed, so the 18th became redesignated as an Airborne Corps.

In August 1944, the Corps deployed to Europe, and took command of both the 82nd and 101st Airborne Divisions, prior to Operation Market Garden. It as after the 'Battle of the Bulge' in late 1944, all US Airborne Divisions came under the command of the 18th Corps. The Corps, with their sub-Divisions took part in Operation Varsity (The crossing of the Rhine).

Since WW2, the 18th Corps has deployed its sub-units to a number of conflicts, and humanitarian roles. These include Vietnam, Grenada, Iraq and Afghanistan.

This is a fantastic reproduction of the Shoulder Sleeve Insignia worn by the unit. It depicts embroidered blue Dragons head on a light khaki background. It also has 'Airborne' embroidered above.

Perfect for your Airborne Collection! 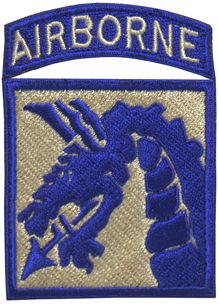