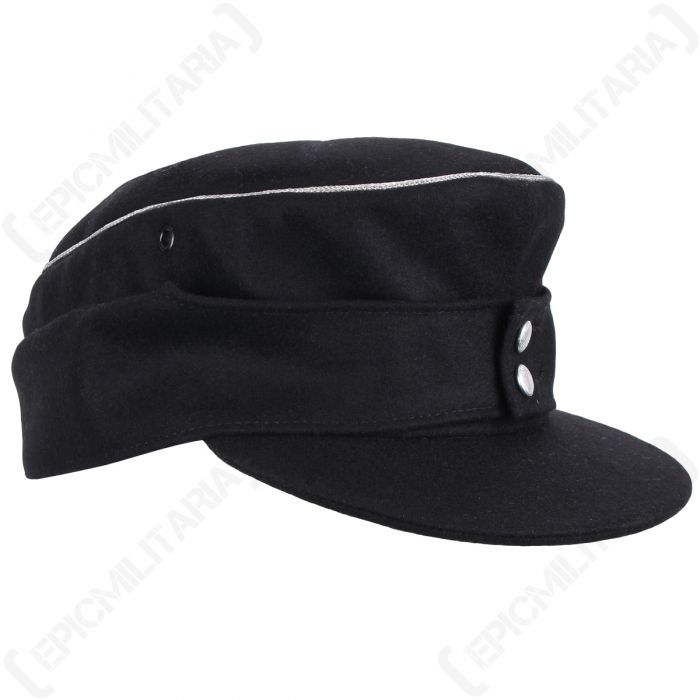 These are fantastic quality WW2 German M43 Panzer Officers Caps, made in Germany by Erel.

The Erel company made hats for the German military during World War Two, and the company is still operating today, making great quality reproduction hats.

The M43 Field Cap was based upon the Bergmutze Ski Caps of Gebirgsjager, and became one of the most widely used pieces of headwear of WW2. They had a slightly longer visor than the Bergmutze, but did not have the leather sweatband of earlier hats, due to the necessary economisation of manufacture.

The upper of these caps is made with 100% wool with a 100% cotton lining, and are black in colour. The cap features 2 silver pebbled buttons on the front, which can be undone and the hat to be turned in to a 'balaclava' like garment. The caps have silver coloured piping running around the circumference of the top.

High quality repros, true to the originals and made from quality wool.

Please Note: The visor on these caps is made from a cloth-covered pasteboard/heavy cardboard, as per the originals. They are therefore NOT machine washable.

These reproduction WW2 German M43 Panzer Officers Caps are great quality, and a must for any re-enactor.