This style belt buckle came into existence in 1935 after the end of the Weimar Republic although the style itself was kept the same. Originally the buckles would have been worn by the DLV until 1935 when Hitler changed their designated name to the Luftwaffe, The new buckles adopted the new Luftwaffe Eagle and was worn throughout the Air Force. Around 1940 the buckle became available in different colours, dependant on the theater of war and the uniform it was to be worn with, either in the Luftwaffe Blue or the Tropical Olive colour although soldiers in the field would often paint their buckles a more tropical sand colour while repainting vehicles, helmets and other combat gear. The silver buckle was still manufactured but primarily worn for dress uniforms.

Originally the buckles would have had the leather tab attached which would be stitched to the belt however in later years this was dropped to save leather. There was a difference between what people would class as an "Early War" buckle and a "Mid - Late War" and that was the finish, the early buckles tended to have a pebbled finish around the Emblem whereas the later buckles were a smooth finish although pebbled buckles were still produced until the end of the war by some manufacturers.

The motiff is slightly domed and features the Luftwaffe eagle clutching a canted Swastika on a pebbled backing and circled by a wreath. To the rear of the buckle are the twin prongs on the right side for attaching to the belt itself and the catch on the left side. 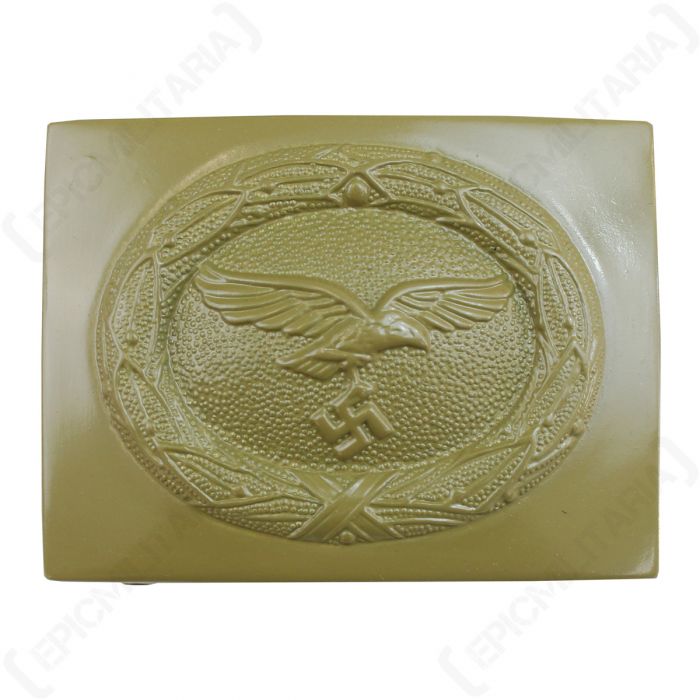