Named after Hermann Göring, this unit originated as a police battalion in Prussia during the early 1930’s when their name-sake was Interior Minister. After transferring to the Luftwaffe in 1935, the unit became the first Fallschirmtruppe in the German military, when Göring was so impressed observing Soviet military manoeuvres that he too wanted to make use of this new military phenomenon.

Assigned to the Luftwaffe, as were all Fallschirmjager units, the Hermann Göring was regimental size in 1939. In July 1942 the unit was upgraded first to a brigade force, and then a full Panzer division in October 1942, when this Panzer tunic eagle would have issued. In 1944, the 1st Division was combined with the newly raised Fallschirm-Panzergrenadier-Division 2 Hermann Göring to create the Fallschirm-Panzerkorps Hermann Göring.

As a Panzergrenadier Division, and later a Panzerkorps, the unit fought in North Africa, Sicily, Italy and Poland, before surrendering to the Red Army on 8th May, 1945.

This is a quality reproduction Luftwaffe Fallschirm-Panzer Division 1 Hermann Göring Division tunic eagle, made with white thread on a black Panzer backing. 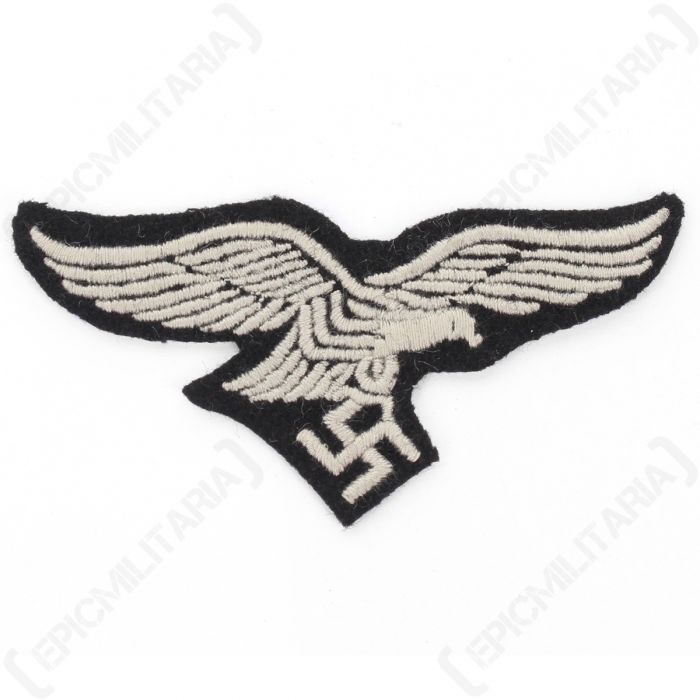