The S-mine (or Schrapnellmine in German), also known as the Bouncing Betty, is the best-known in a class of mines known as bounding mines. When triggered, these mines would leap into the air and then detonate, generally at around waist height. The explosion would expel a deadly burst of steel balls and steel fragments in all directions to maximise damage. The S-mine was an anti-personnel landmine developed by Germany in the early 1930s and used extensively by German forces during World War II. It was designed to be used in open areas to attack unshielded infantry. Two versions were produced, designated by the year of their first production: the SMi-35 and SMi-44. There are only minor differences between the two models.

Production of the S-mine started in 1935 and they were a key part of the defensive strategy of the Third Reich. Until production ended with the defeat of Germany in 1945, over 1.93 million S-mines had been made. The mines were responsible for inflicting heavy casualties and slowing, or even repelling, drives into German held territory throughout the war. The design was lethal and successful enough that it was much copied and remains one of the definitive weapons of World War II.

These wonderfully designed framed military blueprints showcase the design of some of the most famous technical developments of WW2. We have selected a range of aircraft, tanks, weapons and more to present in impressive detail, all framed and set as a unique display piece for anyone's collection. These are modern imaginings of how several famous items and vehicles will have looked during their development in a ‘patent print’ style.

Each print is A4 sized and comes pre-assembled in a black frame. We‘re really excited about these products and are sure they will make a fantastic gift...whether to a loved one or just for yourself. 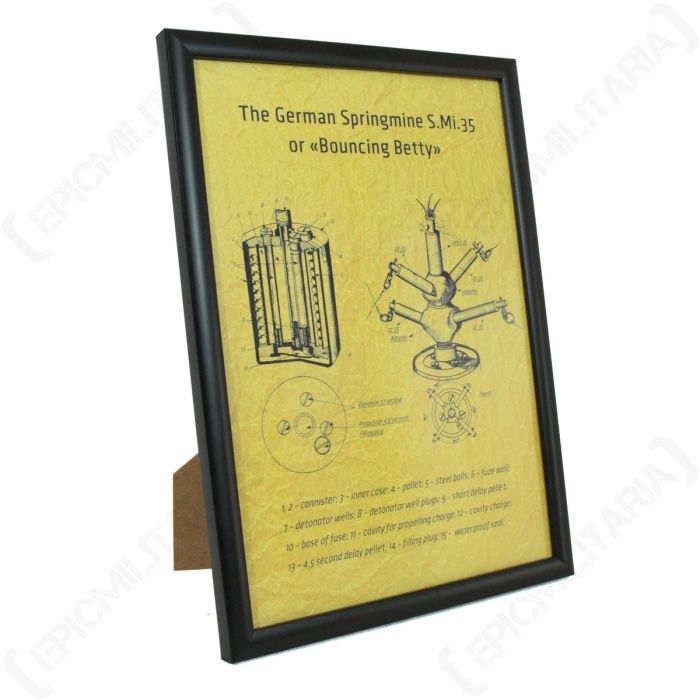