The F1 Grenade is a hand grenade that was mass produced by France both during, and after WW1 and was used en masse in the majority of European countries throughout the First and Second World Wars.

The F1 grenade was first put into mass production by the France in 1915, during the First World War. In May 1915 the first of the F1 grenades appeared in the French Military but in limited quantities. This new weapon inherited from the experience of the first months of the war: was made to be more modern, with an external grooves pattern for better grip and easier fragmentation. The second expectation proved deceptive, since the explosion in practice gave no more than 10 fragments (although the pattern was designed to split into all the 38 drawn divisions). The design was proved to be very functional, especially due to its stability compared to other grenades of the same period. Later, the F1 was used en masse by many foreign armies in the period from 1915 - 1940. The F1 grenade has been used as a basis for the development of many other grenades by different nations, including the US and the USSR.

These wonderfully designed framed military blueprints showcase the design of some of the most famous technical developments of WW2. We have selected a range of aircraft, tanks, weapons and more to present in impressive detail, all framed and set as a unique display piece for anyone's collection. These are modern imaginings of how several famous items and vehicles will have looked during their development in a ‘patent print’ style.

Each print is A4 sized and comes pre-assembled in a black frame. We‘re really excited about these products and are sure they will make a fantastic gift...whether to a loved one or just for yourself! 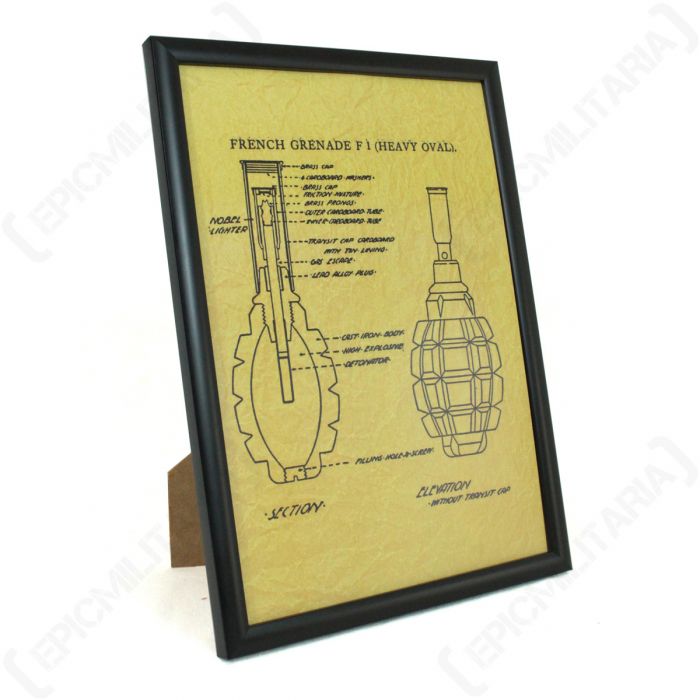