The 9th ID can trace their history back to World War 1 and have fought in WW2 and Vietnam.

During WW2 the 9th Infantry Division experienced their first combat in November 1942. This was during the fighting by the Allies to recapture North Africa. Safi, Morocco, became the first city to be liberated by the Allies, and this was undertaken by the 9th. The Division then went onto fight in Tunisia and Sicily, before landing at Utah Beach, Normandy on 10th June 1944 (D-Day + 4). The 9th fought their way across France and into Germany, which is where they finished the war.

The 9th was inactivated in December 1991. In the 1994 film 'Forrest Gump', Forrest (played by Tom Hanks) is depicted as a member of the 9th Infantry Division in Vietnam.

This is a fantastic reproduction of the Shoulder Sleeve Insignia worn by the unit. It depicts a heraldic design given to the ninth son of a family. This represents the son as a circle in the middle with eight brothers around him. The blue represents the infantry, the red the artillery with all the white making the colours of the flag of the USA. 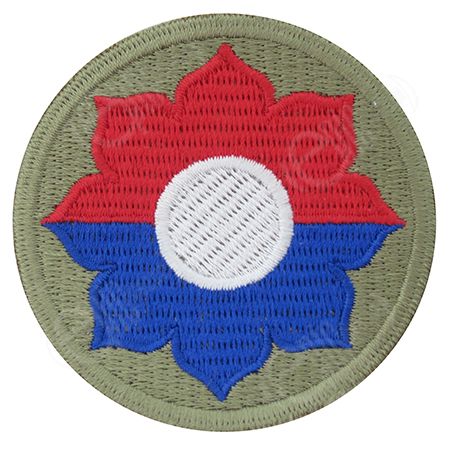 Check out our socials!