US Division Patches - 85th Infantry Division. Also known as the 'Custer Division', the 85th was the second of all draftee divisions to see combat in WW2.

The 85th ID was formed during WW1 and also saw combat during WW2.

During WW2, the Division arrived at Naples, Italy on the 27th March 1943. They fought across Italy, taking part in many battles to clear the areas of axis troops.

Through the campaign, the division suffered some 7,268 casualties, with 1,717 killed In action.

Following WW2, The 85th returned to the USA, before it became part of the US Army Reserve in 1947. In 1959, the Division's role was changed to 'Training', and this is the role it performed until it was inactivated in 2007.

This is a fantastic reproduction of the Shoulder Sleeve Insignia worn by the unit. It depicts embroidered 'CD' initials in red, on an Olive green background. 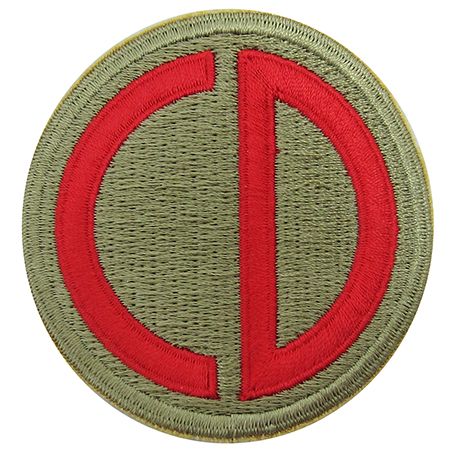