Activated at Fort Knox on the 15th February 1942, The division spent a period of training at various locations in the US. It was in February 1944, the Division was sent to the UK to continue training, until July of that year, when the 6th landed on Utah beah, Normandy. From there, units of the 6th would find themselves fighting alongside others to support the Normandy campaign. At the end of that campaign, the 6th AD reformed, before finding themselves fighting in various locations throughout France. They were sent to Lorient in Mid-August, before being again relieved by the 94th Infantry Division. Elements of the 6th AD would take part in the battle for Brest. The Armored Division would then cut across France, reaching the German border on the 6th December 1944. It wasn't long before the German forces launched their counterattack through the Ardennes, and the 6th were ordered north to help fighting around Bastogne. Following a short period of rest, the division then crossed through the Siegfried Line and reached the Rhine River at Worms on the 21st March. Crossing the River, the 6th went across through town after town, until stopping at Rochlitz and waiting for VE day.

Elements of the 6th Armored Division also took part in the Pacific Campaign, fighting on the Mariana, Marshall, Ryukyu and Philippine islands.

Following the end of the war, the 6th Armored Division was inactivated on the 18th Spetmeber 1945. 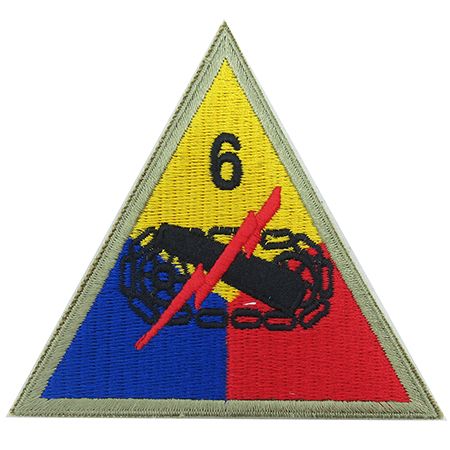