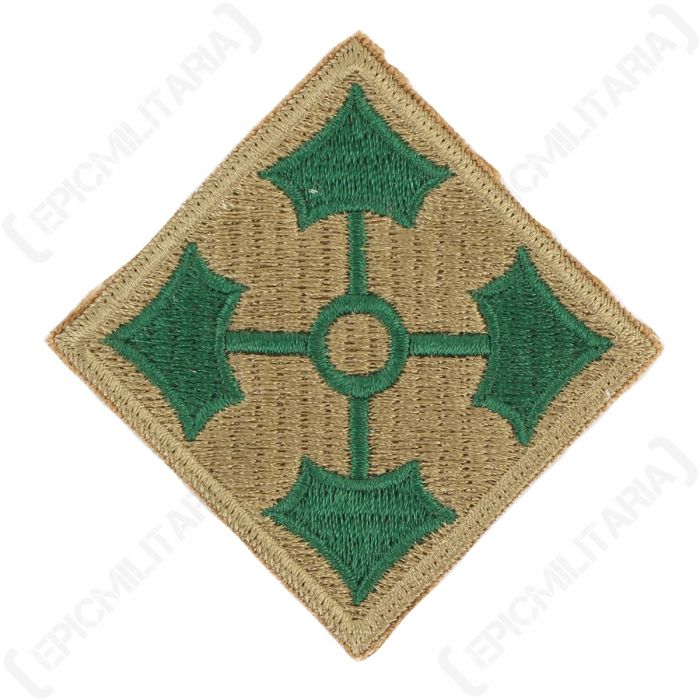 US Divisional Patches - 4th. Infantry Division. Nicknamed the "Ivy Division" or the "Poison Ivy Division" their motto is "Steadfast and Loyal".

The 4th ID can trace their history back to WW1 and have fought during WW2, Vietnam, Iraq, and Afghanistan.

During WW2, the 4th ID landed on D-Day (6th June 1944) at Utah beach. In-fact, the Division claimed to be the first allied troops to land at the Normandy beaches. The 4th fought inland, relieving the cut off 82nd Airborne Paratroopers at Sainte-Mère-Église. Once the 'Ivy Division' had helped liberate Paris, they moved onto Belgium  and Luxembourg, coming face to face with the German troops as they moved forward for the Ardennes offensive. The 4th held out, counterattacked and moved on into Germany, where they were when the war in Europe ended.

The Division is still active today and currently has it's headquarters in Fort Carson, Colorado, USA.

This is a fantastic reproduction of the Shoulder Sleeve Insignia worn by the unit. It depicts four embroidered green Ivy leaves, on a Khaki diamond.