US Division Patches - 3rd Infantry Division. Nicknamed the "Rock of the Marne" with the motto "We Shall Remain".

The 3rd ID can trace their history back to World War 1 and have fought in many wars/conflicts since including WW2, Korea, Iraq, and Afghanistan.

During WW2, The 3rd became one of only a few divisions to fight the axis forces on three European fronts. In November 1942, the Division landed in (and captured half of) French Morocco as part of Operation Torch. In July 1943, the Division landed on Sicily as part of Operation Husky. In September of that year, the 3rd went ashore 9 days after the landings in Salerno, Italy. January 1944 saw the Division landing at Anzio, and taking heavy losses, the most of any US Division in a single day during the war. In August the same year, the 3rd then took part in the invasion of Southern France pushing all the way into Germany. It was soldiers from the 3rd ID who received the surrender of the town, Berchtesgaden, famous for it's frequent visitors such as Adolf Hitler, Hermann Goering and Joseph Goebbels.

The Division is still active today, and has its Headquarters in Fort Stewart, Georgia, USA.

This is a fantastic reproduction of the Shoulder Sleeve Insignia worn by the unit. It depicts embroidered blue and white diagonal stripes with a khaki/green edge. 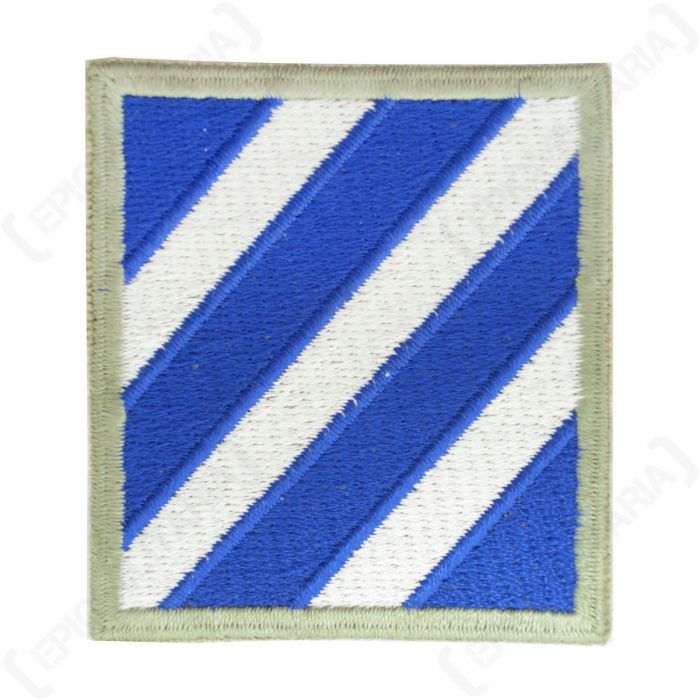