The 29th ID can trace their history back to World War 1 and fought  during WW2, Iraq, and Afghanistan.

During WW2, the Division sent the 116th Infantry Regiment to support the 1st Infantry Division during the landings at Omaha Beach, Normandy on D-Day. These soldiers were among the first to land on the beaches. They suffered a huge number of casuaties, but by the next day, the whole 29th Infantry Division had came ashore. The Division then took part in the Normandy breakout, and the eventual push on Germany. The 29th were holding posistion at the Elbe River when Victory in Europe was declared.

After WW2, the 29th ID was reorganised as a 'National Guard' unit, and is still performing this role today. Their HQ is currently in Fort Belvoir, Virginia, USA.

This is a fantastic reproduction of the Shoulder Sleeve Insignia worn by the unit. It depicts the Korean 'Monad' design symbolising 'Eternal Life' and has the Blue and Grey in a teardrop design. 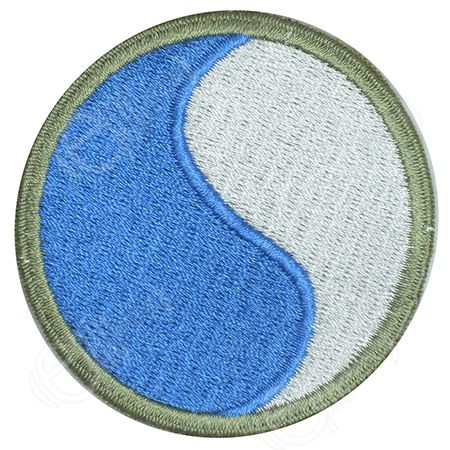