The 1st AD can trace their history back to the mid 1930's, but were activated in 1940. They have fought  during WW2, Iraq, and Afghanistan.

The Division took part in Operation Torch, the Allied invasion of North Africa in November 1942. They fought through many cities and achieved an impressive combat record during their fighting here. Following this, the 1st Armoured then took part in the Allied invasion of mainland Italy, fighting again through many towns and cities (Including Rome). It was in the Po Valley, Italy, where the 1st AD finished the war.

After WW2, the Division was inactivated, and then reactivated in 1951. Their HQ is located at Fort Bliss, Texas, USA.

This is a fantastic reproduction of the Shoulder Sleeve Insignia worn by the unit. Embroidered onto a Triangle, the blue represents the Infantry, the Red for Artillery and the Yellow for Cavalry. There is a black tank track surrounding a cannon barrel, behind a red lightning flash. This design was approved in 1940 and is a combination of the WW1 Tank Corps and the dated 1930's 13th Cavalry patch. 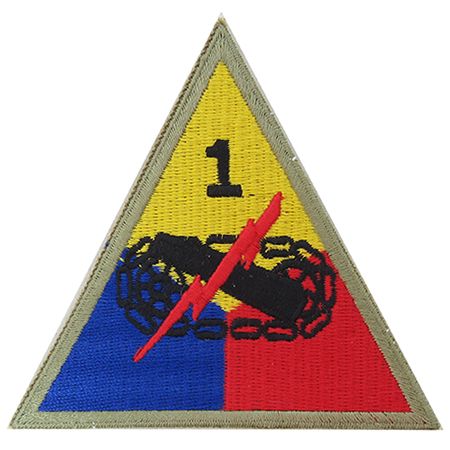