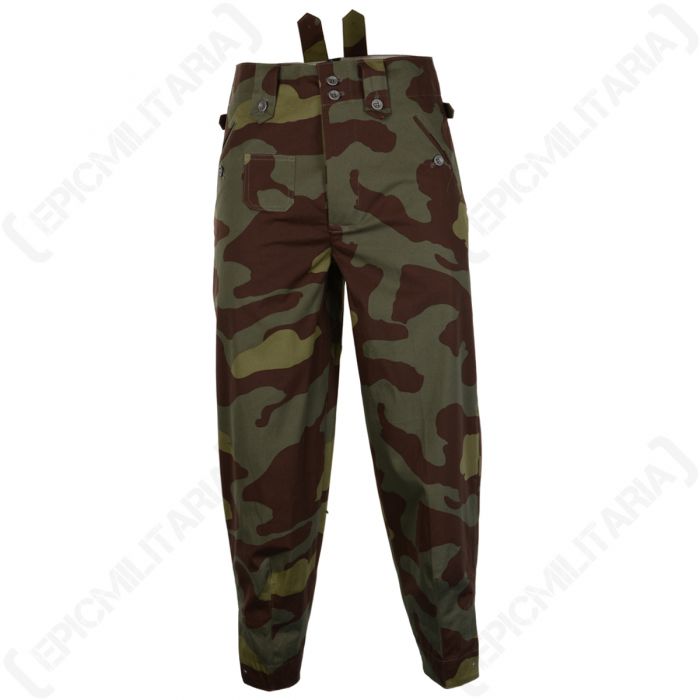 Following the capitulation and disarmament of most of the Italian armed forces in 1943, stocks of Italian material were used by Germany to meet the increased demand for equipment in the face of the slowly deteriorating wartime economy.

The M43 German uniform trousers appeared in late 1942 and were issued to the Army, Waffen-SS and Luftwaffe ground units. With 3 years of combat experience to fall back on, a number of improvements were made to the previous trousers, carried over from WWI. The most notable were tapered ankles to fit the leggings better, reinforced seat for improved durability, and belt loops.

These M43 German Trousers in Italian Camo come with two open front hip pockets which are sealed with a single button (per pocket), one watch pocket on the front right and one button sealed rear pocket, also on the right. There is a concealed, four button fly with two additional buttons on the waist for extra security. Along with an integrated, adjustable belt, the trousers also have 4 belt loops and internal buttons to allow the wearer to connect braces if required. Around the ankles are integrated ties to help combat ingress by providing a snug fit.

Along with the M43 Italian Camo Tunic, these trousers are a must for any serious reenactors out there but would make an ideal kit for airsoft and paintball players as well.