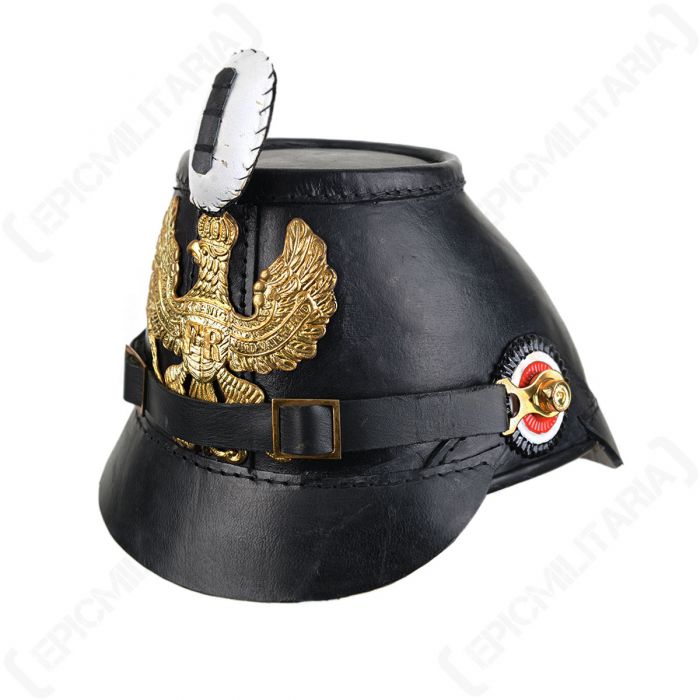 Almost every major European power throughout the 19th Century had she shako in their uniform. Even in 1914 it was still field wear for some, including the Imperial German Jägers. Their Shako helmets were a symbol of their status, defining them as different to most other Imperial German units that wore the spiked Picklehauble.

Most Jäger were Prussian, although Saxony and Bavaria also fielded Jäger units. The Jägers were better trained, better equipped and had a certain level of autonomy when compared to regular German Empire troops. However, the realities of modern warfare buckled the authority of tradition, and the Jägers were quickly integrated in to regular infantry units for trench warfare. The introduction of the Stahlhelm in 1916 ended the use of Shako helmets on the frontline.

This reproduction Shako is made with black leather with an adjustable leather liner system inside. The front has a large Prussian eagle inscribed with ‘Mit Gott, Fur Koenig und Vaterland’, or ‘With God, For King and Country’. There is a leather chin strap that fastens either side of the chin. One fastener is hand-painted in the Imperial German colours of black, white and red on one side. The other side has the Prussian colours of black and white. A black and white cockade is also included, to be worn above the eagle. Check under the liner!

Please note: there is slight damage to each of these helmets which is why they are listed as imperfect.