Following Germany’s surrender in 1945 all armed forces, including the air force, were disbanded. However, the strategic importance of West Germany in the growing Cold War quickly became apparent. In 1955 West Germany joined NATO and the Bundeswehr, the new German Armed Forces, was created. The modern Luftwaffe was launched in 1956.

Whilst no organisational continuity carried over from the Luftwaffe of the Second World War, many veterans did rejoin the new air force, and as can be seen in the pictures some features on the uniform also bore a resemblance.

These tunics have four pleated pockets and pebble buttons attached, four for fastening and one for each pocket. These tunics appear to be nearly brand new, unissued and in mint condition.

Please note: Due to the surplus nature of these tunics, you may receive a tunic without insignia like shown in the images. 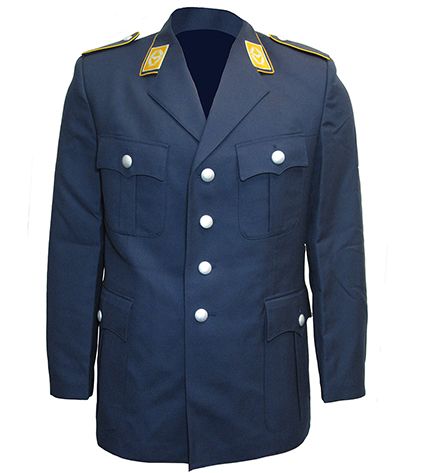