US Division Patches - 75th. Infantry Division. Originally nicknamed the "Diaper Division" as it was the newest combat division during WW2 this was quickly changed after the divisions performance at the Battle of the Bulge to the "Bulge Busters".

The 75th ID was formed in 1943, and in early December of 1944 (after a brief training period in Britain), the Division moved to France. When the 'Ardennes Offensive' began, the 75th ID was rushed up to the front to push the German forces back. In January, the Division relieved the 82nd Airborne Division along the Salm River, Belgium. The 75th then continued to advance, eventually crossing the Rhine, and finished WW2 in Northern Germany.

Following WW2, the Division was inactivated in November of 1945, but was briefly activated between 1952-1957 as Army Reserve. Once again, the 75th Division is active in a training role (since 1993) and has provided numerous units to train those who went overseas to Iraq.

This is a fantastic reproduction of the Shoulder Sleeve Insignia worn by the unit. It depicts an embroidered 7 and 5 in blue and red respectively. These are on a Blue, White and Red diagonal striped background with a Khaki border. 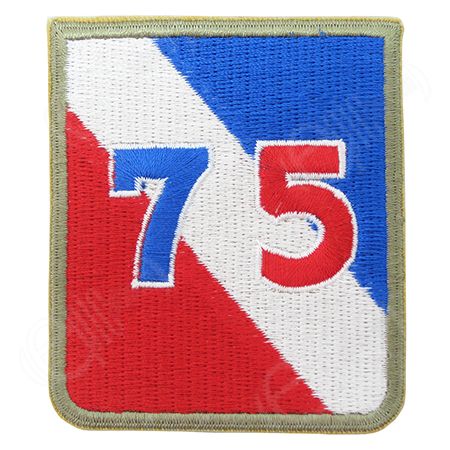