The 5th Armored Division were activated on the 10th October 1941. Arriving in the United Kingdom during February 1944, they began training for the upcoming invasion of Europe. On the 24th July 1944, the Division came ashore at Utah beach, Normandy. They first saw combat on the 2nd August and advanced through various towns and cities whilst taking part in bitter fighting. Arriving at the Belgian border in September, the 5th AD turned east, and travelled 100 miles in just 8 hours, crossing the River Meuse on the 4th of that month. Liberating Luxembourg City on the 10th September, the Division depolyed along the German border. A reconnaissance unit travelled into Germany, the first allied troops to set foot on the enemy's homeland. It was on the 14th of the same month, the 5th AD broke through the Siegfried line at Wallendorf, until pulled back on the 20th. The 5th Armored Division finished the war in areas near to the Elbe river.

The Division was inactivated on the 11th October 1945. Briefly activated again in 1950, it was finally inactivated in 1956. 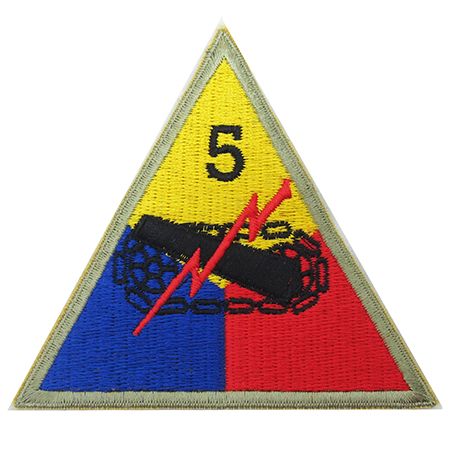