US collar insignia as worn by Officers in the Women's Army Corps during WW2.

The US Women's Army Corps (WAC) can be traced back to May 1942, when the Women's Army Auxiliary Corps (WAAC) was formed. Initially, being an Auxiliary unit, the WAAC did not have Military status, but in July 1943, the WAC began. These were the first women, other than Nurses, to serve within the US Army. The women of the WAC were unsung heroes during WW2. Clerical work, Mechanics, Air Traffic Controllers, Drivers, Electricians, the list was never ending for the tasks they carried out.

About 150,000 American women eventually served in the WAAC and WAC during World War II.

The WAC was active until 1978 (when men and women were integrated in the Army), with women serving overseas during WW2, Korea, Vietnam and in countless other locations.

Known as the 'Pallas Athene' these badges would have been attached to the collar of the US Officer's Class A uniform. On the WAC Service coat, two were worn on the lower of each lapel. These were worn by members of the WAC performing administrative roles to regular Infantry, Artillery or Armoured units

This is an essential piece of insignia to complete your US Women's Army Corps look!

Sold as a pair. 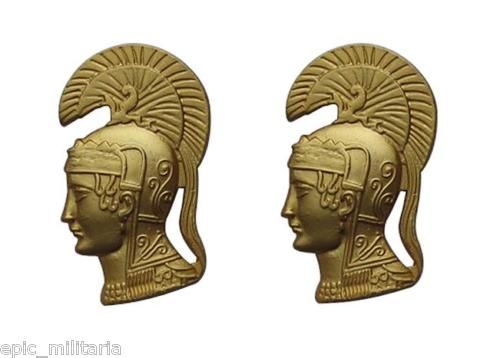