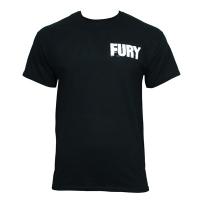 Recent Hollywood blockbuster 'Fury' follows the 2nd Armored Division at the centre of the Allies final push into Germany to end the war.

In this section we have a range of products inspired by the film and some quality crew gear. One of our staff worked on location for the production as part of the props/costume department, and during his time there also designed this crew gear which was worn by cast and crew on set. We also have a small quantity of this crew gear for sale. There are quite a few knock-offs of these going around on the internet, but these are the real deal!